Bob complains to Joe, "I'm switching to BlogPad XanPress because I'm so fed up with eJournal 404."

"Whatever works," Joe replies with a shrug.

What an interesting phrase. Who would, in response to someone's cry for vindication in their choice to change, say, "Eh, stick with what doesn't work"?

No one. At least, no one without ulterior motives.

So, yes, as a reasonable person, I suggest you do "whatever works" for you and your family--especially in the homeschool arena (since this is a homeschool blog and all <smile>). The only caveat I would include would be to make sure you have a good idea of what it means for something to "work" before you pitch it for something else.

One of the good ways to decide if what you are doing is working or not is to set some goals. If you're not hitting those goals, it's likely time for a change.

But there are also pitfalls to pitching things that "don't work." I read a great story about answered prayer today which is very encouraging. It's great when prayer "works," yes?

But what happens when prayer "doesn't work"? We get dejected, disappointed, angry, and perhaps give up on that for something else. After all, we should stick with whatever works, right? Who would fault me for giving up on God after He let me down? Who could tell me, "No, Luke, stick with what's not working"?

Sometimes what appears to be not working still is. The analogy that just popped into my head is my alarm clock. It still works even though it is silent all but ten seconds of the day. It's doing something in the background, even if I have no idea what that is and it does nothing to help me now.

And so, as you consider your homeschooling options, and the extra-curricular opportunities you may have, be careful that you don't stop something that doesn't appear to be working when it actually is.

Because who would want you to stop something that's working?

And probably not Bob or Joe either.

Experience India and Give Your Kids the Same Advantage Mine Have 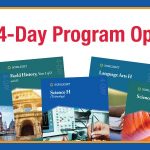