What Did Mary Know? A Christmas Devotional 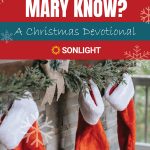 I've listened to the Christmas carol, Mary, Did You Know, at least 30 times this season. I find it gorgeous, and I can't stop thinking about its central question: Mary did you know?

Watch a beautiful a cappella rendition of a favorite Christmas carol

Did Mary know? I wasn't sure what Mary knew. So I re-read the Gospel stories again. And I think the answer is yes and no.

Bible scholars talk about how all Jewish girls at that time dreamed of being the mother of the Messiah. It was promised that a savior was coming, a redeemer was coming. So when the angel Gabriel appeared to Mary, I imagine that Mary was surprised and maybe a bit concerned, but I doubt she was flabbergasted. She knew that somebody would bear this baby.

The angel gave Mary an idea of who her baby would be. He told her she would have a son and that she should name Him Jesus. He said her son would be great, that He would be called the Son of the Most High, that He would gain David's throne, and that His kingdom will never end. The angel ends this with the assurance that this will all come true, for "no word from God will fail."

Soon after, Mary goes and visits her cousin Elizabeth, who lived in another town. When Mary walks in the door, Elizabeth's first words are "Blessed are you among women, and blessed is the child you will bear!"

What did Mary make of this?

I doubt she was beginning to show yet. So how did Elizabeth know her news? Elizabeth continued with the remarkable question, "Why am I so favored, that the mother of my Lord should come to me?"

As further testimony to Jesus' identity, a stunning thing happened the night of Jesus' birth. When Mary was recovering from labor, a group of shepherds showed up in the stable. Think of how strange this would be. But they came with an amazing story. They had been out in their fields when a brilliant angel appeared with good news:

The shepherds left their fields and hurried to Bethlehem. They relayed the story to Mary, sharing the message that her son was indeed the Messiah.

Then, Mary received more wonders when she and Joseph followed Jewish rituals and took Jesus to the temple on the eighth day. A devout man named Simeon showed up. God had told him he wouldn't die until he had seen the Messiah. When he saw the baby Jesus, Simeon took the boy into his arms and essentially said "I can die in peace now because I have seen the Lord's salvation, a light for the Gentiles and the glory of Israel." Wow.

Next, a prophet named Anna came up and spoke about the child as the redemption of Israel. This was not Mary's ordinary trip to the temple!

Much later, the wise men came. These foreigners bowed down and worshiped this young boy. They brought Him kingly gifts – gold, frankincense and myrrh – not your typical baby gifts. Further testimony to Jesus' true identity.

So that's at least part of what Mary knew. But what did she not know?

What Mary Did Not Know

Though Mary didn't know everything, she became not only the mother of Jesus, but also one of His followers. We don't know much of her story after Jesus' resurrection, but we know she was part of the early worshiping community. She embraced the larger work that her son, the Messiah, had come to do. She rejoiced in her Savior. May we do the same! 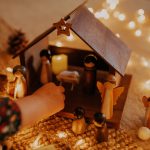 The History in Your Nativity Scene 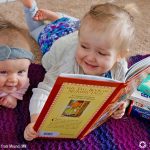 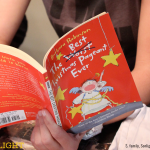 How to Make Room for Wonder This Christmas