Scheduling the Day for the Reluctant Homeschool Learner 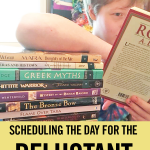 I see educators try to hide learning under layers of unrelated pulp and nonsense. It’s thought that if we smuggle math within a noisy, colourful computer game, we can bypass the child’s natural hatred for math. But children don’t hate math!

There are two common reasons for homeschool reluctance:

Often the way they see their work is affected by how we divide their time. Here are four tips for scheduling the homeschool day to fan the flame of meaningful discovery, so we don’t have to light match after match of pulp and nonsense.

1. Read as They’re Waking Up

I’m sure you have noticed that your child is much more willing to cozy up for a story after they’ve been exhausted by a visit to the park. Having sprung and thrashed and romped, she is ready to fine-tune herself to the particulars of a page. There is a rhythmical expansion and contraction in her day.

Wake-up time is a seldom-recognized moment contracted to the slow and the small. We either try to skip that first languorous beat of their rhythm by banging pots and pans, or we just accept that homeschooling will have to wait, but have we tried playing to that first beat? Maybe the half-closed eyes see more of the far-reaching slowness of the read-aloud than in the expanded tumult of late-morning. Try scheduling Read-Alouds in those first moments.

When I first started teaching my daughter to write, I simply sat her down at the table until she begrudgingly penned what I wanted to see. So excruciating was this process that I had to admit a failure of method.

My solution was to make the learning more physical. I arranged an ABCs gauntlet of zombies and spaghetti and swivel-chairs and sticks. When she managed to write cat using the chair and the spaghetti, we would play as cats on our way to the next station. Next we acted the letter o by somersaulting in the instructed direction between two strings laid on the floor.

Physicalizing both the symbols and the meaning was starting to make connections that were otherwise blocked. I stopped scheduling 15 minutes writing sentences and started scheduling 1 hour of ABCs gauntlet.

3. Build in Education as Service

To a child, learning is purposeful and experimental. It’s a process of investigation, directed ever outwards. He plays with LEGO, investigates physical rules, and retains the information. There’s plenty of input throughout the day that he does not retain, but he retains these rules because he has a sense that they are a part of a much bigger project.

Building a LEGO car, he creates a design that performs a real-world function. When he plays it, he has a burgeoning sense of influence on the shape of the world. As the scope of his sense of the real-world expands, so do his tools of learning.

That sense of influence on the world develops into a crucially social one.

With our instruction, he sees that his chief influence on the world is to make the Lord known though loving service. He starts to treasure the servant’s most effective tools. He becomes reluctant to go through drills simply for the sake of acquiring knowledge, and starts learning for the sake of love. This is why the most abiding antidote to reluctance is the experience of really shaping the world with his skills and actually helping people with his wisdom.

Schedule, for example, part of your Language Arts time specifically for the use of their knowledge to bless others.

Don’t think of this as a fun extra; schedule it in as part of the lesson. I believe retention depends on this kind of purposefulness. When reluctance asks the question, "Why should I have to…?" empowered service answers, "Love."

4. Add Time with the Discovery Journal

There are more haters of Math than any other subject, and it’s no coincidence that there is no other subject where playful experimentation is so routinely disparaged. The student is treated as nothing more than a receptacle of information—a receptacle that keeps breaking and leaking. It’s no wonder that the student of Math is often reluctant.

I break many of our lessons into three:

The second is the most personal and comes in the form of a journal. My daughter’s Discovery Journal is hers and only hers. I do not correct mistakes, nor mark it or test it.

Her entries run the gamut of profound and silly:

Every time she opens that little journal, she is holding proof that she is a scientist, not a slave; a truth-teller, not just a receptacle—that she is becoming wise, not just performing drills.

I allow at least 5 minutes of any homeschool lesson for her personal wisdom-record when she can jot notes in her Discovery Journal.

So it seems learners are reluctant when learning is long and pointless. But there are ways to organize the day so that learning is natural, connected, purposeful, and experimental. Break up your lessons into smaller chunks and distribute it in ways that express learning physically and use the skills lovingly.

Choose a curriculum that is both relevant and enjoyable, one that respects the mind of the child and gets the whole family eager to learn. Choose Sonlight. 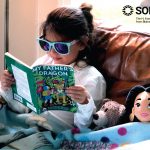 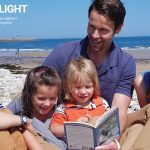 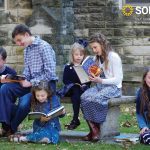