Music in Your House

When my kids were little, I longed for the sound of a piano to fill our house. It's one of the few instruments to create beautiful music all on its own (without needing additional instruments to play along). It can be a huge aid in worship, and to be honest, I just love the sound of it.

I took piano lessons as a kid but I disliked recitals and, like everyone, I hated to practice. Thankfully, I did learn enough to plunk out hymns from a hymnal—something I still love to do, even when my fingers don't hit the right keys.

But none of my kids got into the piano. When our oldest, Amy, tried to take lessons, I found it was just too hard to fit in practice on top of all the other "stuff" that filled our lives.

I didn't give up on teaching the kids some form of music, because I had decided early on that it was important that they learn to play some instrument. I believe music education is good for the brain. And when kids can read music, they can sing parts and add depth to a church's singing. I've seen the process of learning music build my children's confidence. While every skill one learns has benefits, music seems to be a more public place to shine. I wanted my kids to be able to shine and be recognized. I wanted them to learn to be part of a group, while also performing on their own. And I wanted them to be able to explore music's unique avenues for creativity.

Phew! So I had good motivation to try something else. I turned to a local Honor Band when the kids were elementary-school age (the conductor permitted Justin in under the age limit). Something about the group setting and the process of joining more advanced groups as they progressed helped keep my kids motivated and interested.

A fun memory of music becoming part of our family's life came the summer before Amy started her junior year of high school, when she joined the marching band and spent a week at band camp. (If you've ever experienced the world of marching bands, you know how intense these summer camps can be!) At the end of the week, the director had the parents come see what the students had accomplished. I took my younger kids along and we watched, impressed, as the band marched in its pattern. Then, the band started the routine again and lifted their instruments to play. Justin's eyes widened as he made the connection and exclaimed "They're going to play, too?!"

The kids were hooked, and eventually they all participated in marching band. Not only did they love to march around and play in formation (though Justin and Luke certainly wouldn't have minded doing so in different uniforms), but they (and we all) also discovered that band was a great place to make friends. The kids in band tended to be more focused and the type of people I wanted my children to hang out with.

While all four kids lettered in band, Amy and Justin were really into it. Justin even formed a "trombone suicide" group (go online for some crazy examples of these dancing trombone groups) and performed at local high school football games. He loved the challenge and developed some great leadership skills as he led the group.

So, I didn't raise any piano lovers, but I was blessed to raise four kids who know their way around a music staff and have explored how their own unique personalities can be expressed in music.

Now I'm interested: what's the story behind the sounds in your house?

Blessings to you and yours,
Sarita

My son was just recounting a story about karate class last night. He was telling a blonde joke and one of the girls in the class—a sophomore in high school—told him it was wrong to "radio-type" people.
He wants to know when she last dyed her hair! 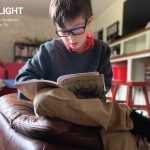 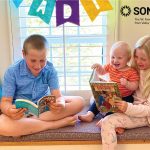 How Sonlight Helps You Help Your Kids 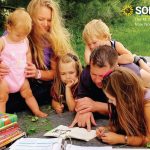