My very first box day was in late June 2002. I was waiting for "a box"
from Sonlight containing what is now called P4/5. I had NO idea what was in store for me. I am a planner, and we were going to start preschool with our oldest child (4) in September. I wanted to get all the books organized, on the shelf and figure out what I was doing. I thought three months was long enough to do that, considering I had a toddler and newborn to care for as well.

Well, guess what? School began on July 5. There was no way I was going to let those books "just sit there." They demanded to be opened and enjoyed. So that is what we did. It started our family tradition of beginning the new school year on the Monday after July 4.

We've now had 7 more Core Box Days, with smaller ones in between. Each one is met with anticipation, excitement and rejoicing. 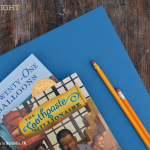 5 Back-to-(Home)school Resolutions to Transform My Year 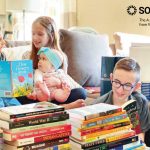 Stories from New Homeschoolers: Why We Opted for School at Home