The Book We Didn't Love

The thrill of Box Day had faded, and I was knee-deep in making the school year a reality. I had three students that year; Mary Hannah was 8, Mathaus was 5, and Jack was 3. One was a conscientious, empathetic bookworm who lived for the smell of a horse barn. Another was a curious, hands-on doer. The last was a spunky new preschooler happiest with a pile of building blocks or an easel ready for finger paints. We were ready for an adventure of epic proportions with spiders who spun messages into webs, the birth of Rome, the unearthing of a pharaoh’s tomb, the antics of the fallible, fickle Greek gods.

What we got was George Müller.

Sandwiched between the dramas of establishing new civilizations, the perils of attempting to appease false gods, and the intrigue of following the arc of classical history was a simple story of a simple man serving the Lord. Flipping through the pages, two things immediately stood out to me: George Müller had lived a breathtaking life … and my kids weren’t really going to be interested in it.

You see, there were other missionary tales in that box, and to be honest, they had much more of a hook. Miraculous escapes. Exotic locales. Man-eating wild animals. These are the things that captivate the elementary set. A guy who prays for bread to feed orphans and has a baker show up? Eh. I mean, it’s cool and all, but what about that cannibalistic river tribe? Now that’s some missionary heroism! 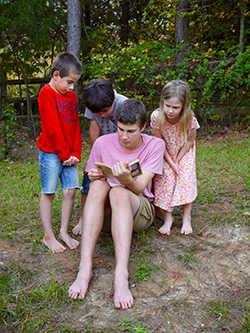 When the IG said it was time, I picked the book from the shelf, heaved a sigh, and began. Each afternoon, the reading seemed to flop. Whether it was the fact that we were still picturing the expanse of China being broken by the building of the Great Wall or the subject matter at hand, I don't know. But what I recall most about George Müller even today were hours spent reminding fidgety children to stop loudly pawing through the Lego bin and to listen, please, guys Just five more minutes, I promise. Unlike most of our history reading, which found children angling for the spots closest to my side, this one seemed to cause us all to grit our teeth and soldier on rather than relish the tale at hand.

We never did fall in love with that book. Unlike some titles that redeem themselves a chapter or two in, George became something like an unwelcome relative in our home; we had to answer the door when he knocked, and we did our duty by him, but our heart was certainly not in the right place. When it was over, there were no bubbly reminisces, no recounting the details to Dad around the dinner table. The book went back into its place on the shelf, and we moved on to bigger, better, more thrilling things.

A month ago— ten years later, if you must know— I again found myself sorting through the books of Core B. This time, I was preparing to teach an 8 year-old with learning challenges, a super-wiggly 7 year-old, and a precocious 5 year-old. My older children— all teenagers now— crowded around, pulling well-loved, dog-eared books from the box and sharing their memories. Detectives in Togas. Charlotte’s Web. Tut’s Mummy. When one of them found the still-pristine copy of George Müller, I gave a little groan.

“Oh, no. They’ll never make it through that one,” I lamented, picturing distracted, disinterested children chomping at the bit to get their teeth into something with more action.

“What?” my 15 year-old asked. “Are you kidding? It’s George Müller! Remember when he prayed for milk, and the dairy cart broke down right in front of the door?”

I do, I thought. I remember it well. You were just about ready to swing from the rafters and … wait a minute. What?

“Yes! And the way he kept track of everything so that he could look back and see how God had met his every need?” the 18 year-old chimed in.

Hold on— you heard that?

“I just remember how he prayed for everything. All the time. And he never asked anyone for a single thing, but God never let him starve—no matter how many kids they had in their homes,” shared the 13 year-old.

“When we started fostering, I thought about him a lot.” 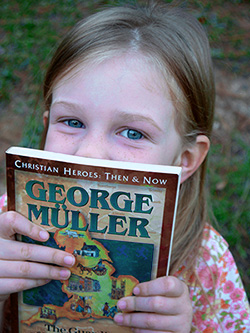 And on and on it went. A retelling now, a decade later, of a life of faith so quiet, so bereft of heart-stopping deeds of bravery, so faithful that it stood out. Written on their hearts, all these years … George Müller, the man who opened his doors to children he couldn’t afford to feed. Right there, in that year so full of pyramids and the Parthenon, my children met a mild follower of Christ who gave them an example to draw on as God guided our family through the journey of faith He had written specifically for us. A decade later, they can still point to reading that book, hearing that testimony as being a time when the beginning foundations to their trust in God was formed.

And I had no idea it was happening.

Later that night, as I shelved books for the upcoming year, I wondered what would have happened if I had decided to give up on George Müller. I wondered what my children would have missed out on if I had followed my own inclination and quietly slipped the book back, pulling out instead something that would have elicited more excitement. I wondered, too, about the books I have skipped over the years. The ones that seemed maybe too mature, or like too much work, or just didn’t strike my fancy. Was a learning opportunity missed? Had God planned on speaking to them— to me— through one of those titles? Had I denied us all a powerful lesson through my own biases or assumptions?

I’ll be reading George Müller again, this time to a new set of squirmy littles. I’ll also be carefully praying over any other books that just don’t seem to be hitting the right note. Maybe I’ll still set them aside. I strongly believe in fitting the curriculum to the family, not vice versa. But maybe I’ll push through anyhow. Because that book we didn’t love? It took root in the hearts of my children and is bearing fruit, even now. 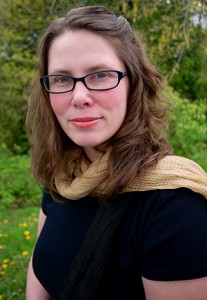 Heather Mills Schwarzen is the wife of one globe-trotting, church-planting adventurer, and Momma to 9 beautifully messy people who range from toddlers to late teens. She writes about parenting, homeschooling, adoption, special needs, and serving a very big God on the family's blog, To Sow a Seed. You can follow the entire family's adventure in a life of ministry on their Facebook page, or via instagram:  https://instagram.com/to_sow_a_seed/. 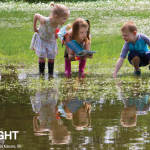