What to Do When Motherhood Feels Like You've Lost Your Gifts 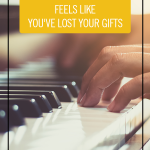 At the age of fourteen, I began teaching piano lessons. I started small, simply taking a handful of students off the hands of my already-booked piano teacher. As time went on, however, I found myself teaching almost every day after school.

During my senior year, I went to a college audition, never expecting to be offered anything. I just thought I’d give it a try and was shocked to receive a full music scholarship. The more I thought about it, the more I realized that a music degree wasn’t what I wanted. I wanted to teach. While it was difficult leaving behind a full music scholarship, I still know that it was the right decision. I wanted to teach elementary school.

I was definitely musically talented though, even though it was something I had to work on. It didn’t come naturally. Thankfully, I loved working on it.

Many years after my last piano lesson, I found out that my piano teacher had planned on telling my mother to save her money and take me out of lessons. After a few months, she could see no natural talent in me. However, that particular week when she was going to inform my mom, something clicked inside me. From that lesson on, I made a continual progression upward. By the time I finished my senior year of high school, I was playing some of the most difficult classical music.

My husband and I married when I was just 19. Teaching piano lessons helped get us through our poor college years, and I soon found myself with my own overwhelming wait list. I taught lessons every single weekday right after school until 7:30 each night. It was both exhausting and wonderful all at the same time.

However, when college ended, I secured a teaching position at our local elementary school and decided to stop teaching piano lessons.

It was a difficult decision.

I loved my students dearly, and I knew that many of them may not find another teacher, but I also knew that my first year of public school teaching would be one of my most trying. Not only was I a novice teacher, but I found out that I was pregnant.

And that was essentially the end of my piano playing.

Once my sweet baby arrived, there was no time to play piano. As he got older, I found snippets of time, but I always had more than two hands on the piano, so playing anything formal was frustrating, to say the least. As more babies arrived, more hands joined me on the piano until eventually, the piano collected dust.

A Perspective Shift About Losing My Gift

As a young mother, I remember lamenting the death of my piano-playing to a coworker, and was surprised to find that instead of commiserating with me, she offered me one of the best pieces of wisdom I’ve ever received.

She said, “You haven’t lost your gift. You’ve just tucked it away in your toolbox for a season. One day, you’ll find a reason to use it again, and when you do, you’ll open your toolbox and pull it out. With a little practice, you’ll shake the rust off and move on without missing a beat. Until then, just think of all the skills and gifts you are adding to your toolbox now.”

As I thought about this, I realized how right she was. I wasn’t losing my gift of music. God was simply busy developing new gifts in me. With my new motherhood and my new job, He was stirring up compassion and patience, stretching my selflessness and pushing the limits of my endurance.

What a perspective change.

A New Meaning for My Gift

Thirteen years later, I’ve found myself pulling out my musical gift once again. Oddly enough, this time it isn’t for service to others.

And what an incredible gift it is now, especially since it’s a personal gift God gave to me to help me through a tough time.

In the last year, our adopted son has entered into a particularly difficult season. It has been a trial for the entire family. I have found that the piano is my escape. I go sit at the piano and spend time with God when I'm feeling frustrated . When I rise from the bench, I felt refreshed and ready to go again.

I didn’t even recognize it as a form of therapy until my grandmother grew sick, and we found out she was dying. The next thirteen days were hard on my family. I grieved so hard for her, and the only solace that I found was playing the piano. Her death was difficult enough, but in addition to my grief for her, I found that I also grieved again for my grandfather, who passed away seventeen years ago. It’s so strange to find that wounds that you thought were healed are still actually quite fresh. They both loved to hear me play.

So, during that season of life, I sat and I played through my tears.

When the notes grew too blurry to see, I let the muscle memory in my fingers take over and play for me. There was definitely a little rust to shake off, but it didn’t matter. It was very much like riding a bicycle. It was as if God had impressed on my parents decades before to pay for years of lessons for this moment in life when I would need my music to help me cope.

It was a gift from God, just for me.

A Renewed Passion for My Gift

Since then, I am still finding my way to the piano when I am frustrated or on days when grief strikes again. However, I am also noticing myself being drawn to the piano more often to play just for fun again—just because I love to make music for the Lord.

Yes, these days, I’m keeping the dust knocked off the piano pretty regularly, and it feels so good.

An Encouragement to Weary Parents Who Think They've Lost Their Gifts

I really thought I’d never play again. And I assumed if I did play, it would be a sad reminder of what it once was. I was so wrong, and I’m so glad that I didn’t give up.

Those wise words, spoken by my coworker that day have played over in my head millions of times since then—not only about piano playing, but about the myriad of other gifts and skills we acquire throughout life.

We spend time learning how to do something, just to wonder later if it was a waste.

You are constantly adding to your toolbox, tucking things away and waiting...and at just the right time, you will use those gifts and skills again.

Don’t lose hope! Simply tuck your gift safely into your toolbox. It will be there when you need it.

Join the Sonlight Connections group on Facebook where other Sonlight parents understand the unique challenges of homeschooling. 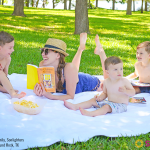 10 Ways Motherhood Is Profoundly Good for You 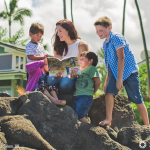 5 One-Liners That Transform the Way I Homeschool 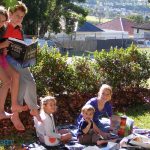 How To Have a Good Day After a Rough Night