Fun Tricks for Memorizing the Values of Math U See Blocks 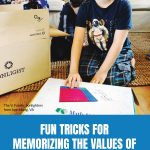 Math U See is probably my favorite math program of all time, as it is easy to use, easy to learn from, easy to teach, and easy to grade. I love just sitting back and watching them quickly do their math and then moving on to the next subject. However, every once in a while, we run into an area that needs a bit more practice or assistance to help it solidify. Since I have multiple children with dyslexia at home, some topics, which come naturally to some children, seem to take more effort to teach at our house. One of the first areas I recall getting snagged on when we first started with Math U See was learning to memorize the block colors and numbers by name without counting.

The Concept of Subitizing

In his teaching videos, Mr. Demme walks your children through learning how to look at a group of three objects, or three spaces on one of the special blocks the program uses, and having your child recognize it without having to count to three. The fancy name for this skill is subitizing, and it’s one a lot of dyslexic children can struggle with at times, especially with numbers higher than five.

However, subitizing is a key skill necessary for being able to add and multiply quickly. Children who remember that five plus six equals eleven will be able to complete their math assignment much more quickly and accurately than those who have to count it out each time.

The Math U See Approach to Subitizing

Math U See uses color-coded blocks to help children remember what each number looks like, so they can easily find and complete problems without having to stop and subitize each time. Children who lack this visual recognition of numbers can learn to recognize the blocks by color as a step towards greater fluency with math facts. If you find your children are struggling with rapid identification of the values of the Math U See manipulatives, here are a few techniques.

1. Use Nicknames for the Color Blocks

Mr. Demme does this to some degree in his videos. You will notice he often calls the eight block, “Chocol-eight,” as it resembles a chocolate bar. He does have a few other names for some of the numbers scattered throughout the videos to help children remember, but we came up with our own names and they seemed to work very well. Feel free to change these up or come up with your own ideas, or have your children name them, as names they choose will have more meaning for them. But if you get stuck or need ideas, you can borrow some of ours.

Instead of having your children tell you their answer in numbers, see if they can tell you any answer from 1-10 in colors instead, without looking. Keep it light and fun, and let them know you’re trying to trip them up, so you don’t expect them to get them all right, but when they do, act extra surprised and impressed.

Take an index card and put a numeral from 1-10 on one side, and draw any shape or object of that color on the other side (you can even do just scribbles). Use the cards to help them quickly recall matching numbers and colors.

What if Too-Tall Ten wanted to blow down the house of the Three Little Pigs? Mint Nine-Scream wants to be a Ten. Who does she need to join up with to achieve her goals? Letting your children interact with the blocks using both their names and colors can help them to memorize them more effortlessly.

Most children should be able to pick up at least a general idea of the color and numeration of Math U See block within a few days or weeks, barring issues that prevent them from identifying color (color blindness, poor vision, etc.). But these color names will stick with them for years to come, helping them to visualize the blocks (and the answers!) for years to come. I’ve had a high schooler laughingly tell me he used the blocks in his head when doing standardized testing. So while the colors aren’t necessary to memorize, the ability to memorize math skills of any type is always beneficial, and knowing the colors by name will help in future assignments. 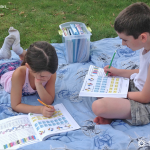 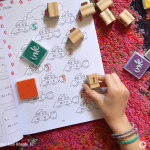 7 Ways to Cultivate a Positive Math Culture in Your Homeschool 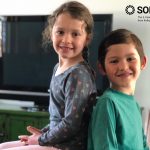