Ideas for Using Your Book of Time

Years ago, when we were first starting out with Sonlight, I chose to make a wall time line following the directions in my Instructor's Guide. I wanted my children to "see" history initially with the years equal distances apart. I knew I wouldn't want it on the wall permanently, so I laminated my time line, and then just used a small piece of rolled tape on the back of each figure so I could easily remove them later. At the end of the year, my children and I took the figures down and permanently mounted them in our Book of Time for future reference. We did that for a couple of years before we started using just the Book of Time. 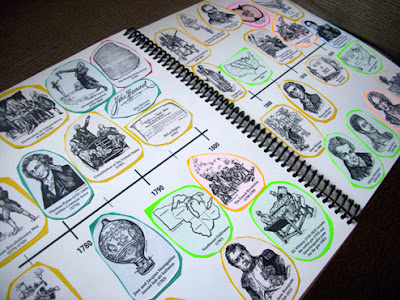 I decided I wanted an easy way for us to remember what figures we had studied each year, so before mounting them in the Book of Time, I stuck them to a piece of Astrobright paper to match the label paper Sonlight assigns to each Core package. For Core B, the color is red, Core C is orange, and so on. Then we carefully cut out around each figure so that just a small margin of the color was showing. We used a glue stick to mount them in the Book of Time.

I found it hard to remember (or be bothered with taking the time) to mount the timeline figures as we went through our Core. Instead, we would usually sit down a couple times a year to stick in a big batch at once. It was a good review for the kids. A friend of mine cut out all the figures at the beginning of the year and then paper-clipped them to the books they went with. When they started reading that book they would add the figure to their Book of Time.

Just for fun (as well as for learning) we included some family events in our Book of Time with tiny photographs-- the year Mom and Dad got married, the year each of the kids were born, the year we moved to Idaho. If you're into genealogy or family history, you could also add in events from previous generations. Tying "history book" events in with our family events makes history seem more "real" somehow.

After we completed all the Cores from A to H, our Book of Time was pretty full. I've been displaying it at homeschool conventions for several years, and by now it's getting somewhat battered. So I decided to make a new one. My younger daughter hadn't had much of a hand in putting together the first one, so I recruited her to assist me with the new one. It's been a great way to review history for her, and now each of my children has a book to save as a keepsake to help remind them of many of the interesting people and events we learned about through our years with Sonlight.

How have you used your timeline figures?