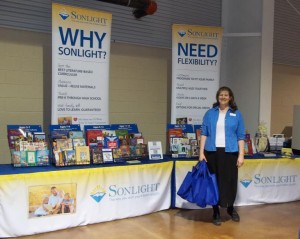 Homeschool convention season is nearly upon us. I always look forward to this time of year because I love traveling to conventions around the country and visiting with other homeschool parents in the Sonlight booth. Judy's most recent post told about the week of training that kicks off the convention season for our Sonlight Consultant team. That's going on this week. We are learning a lot and are excited for the upcoming season.

I'm curious. If you're a homeschooling parent, do you attend a homeschool convention each year? Is that something that's important to you? I have talked to some homeschoolers who have never attended a convention. That always surprises me. They just don't seem to know what they're missing.

I remember the first homeschool convention I attended. My oldest daughter was four. My husband and I hadn't even really been considering homeschooling, but a friend invited me to go with her. We only got vendor hall passes, so we didn't even try to attend any of the workshops, and still, I was overwhelmed. It was an eye-opening experience for me.

In my mind at that time, there were two basic types of curriculum: traditional textbooks and read-and-fill-in-the-blank workbooks. At that convention I learned about unit studies, hands-on learning, and most importantly (for me), literature-based learning. As a life-long avid reader who had been in the habit of reading aloud to classmates and younger siblings long before I had children, I was just blown away to discover that it was possible to provide an education in that way. A superior education, even.

Sonlight wasn't represented at that convention that year, but over the course of the next few months I started researching curriculum options and requesting catalogs. You've heard the expression, "I'll know it when I see it." That's how Sonlight was for me. Once I had the catalog in-hand I realized that was what I had been looking for. So many books in the packages were titles I had read (and re-read) as a child, so I knew that's what I wanted for my children.

The next year I went to another homeschool convention. Still no Sonlight booth, but by this time I had become involved in a homeschool group online and another mom who was also going to attend that convention offered to bring some of her Sonlight books for me to look at. I placed my first order with Sonlight after that, and so we started kindergarten.

I didn't have the opportunity to go to a convention the next year, but Sonlight had worked out so well for us, that we just continued on. I pored over the catalog so much that I practically had it memorized. And I became active on the forums. The following spring I was making plans to attend our state homeschool convention when I learned that Sonlight was looking for homeschool moms to host the Sonlight booth. I knew I would love to do that, so I contacted the company to find out what would be involved... and so... the very first Sonlight booth I ever saw was the one I set up myself back in the spring of 2000.

Every year since then I've continued to represent Sonlight at various conventions in a number of states. It is something I am truly passionate about.

In addition to manning the Sonlight booth I am usually able to find a few moments to walk around the vendor hall to see what's new. Occasionally I may even find time to sit in on a workshop. I've formed friendships with some of the other vendors over the years. And, it's a great way to network with other parents.

It's hard for me to understand the mind-set when I hear another homeschooler say, "I know what I'm going to use for curriculum, so I don't really need to attend a convention." There are so many more benefits to a convention than just choosing a curriculum. If you've never been to one I would encourage you to make an effort to go this year. I think you'll be glad you did!

Goal Setting for Homeschool: Wisdom, Stature, and Favor with God

Attitude adjustment, too, is the work of homeschooling

Welcome the Opposition to Homeschooling