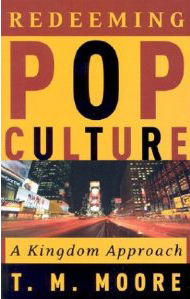 So what are we to make of the relationship between Christianity and culture? As a homeschooling father of four, what can I teach my children about their interaction with the culture of the world? Do we entrench ourselves in our Christian culture, avoiding contact with everything worldly? Should we embrace culture wholeheartedly? Is it possible to engage culture positively?

We must have some understanding of the definition of "culture." T.M. Moore says "culture consists of the collection of artifacts, institutions, and conventions by which people define, sustain, and enrich themselves" (Redeeming Pop Culture, p. 18).

Culture is unavoidable since it permeates our surroundings wherever we live. This common culture is filled with various subcultures, while popular culture often touches upon culture at large as well as the many subcultures, whether they be ethnic, religious, artistic, etc.

It appears, then, that the option to entrench ourselves, thus avoiding culture, is not a viable option. We are, after all, supposed to be "salt" and "light" in the world, not hidden away. If we fully entrench ourselves, seeking to avoid culture entirely, our children will indeed be protected from some of the negative aspects of culture, but they will also be unprepared to interact with the world positively as Christians.

Maybe, then, we should seek to simply embrace culture, celebrating it, participating in it, and, by doing so, "become all things to all people" (1 Corinthians 9:22). But embracing culture without discernment is dangerous. We may find ourselves becoming more like the negative aspects of culture than the positive.

A better way is to engage culture intelligently. Jesus admonished his followers "to be wise as serpents and innocent as doves" (Matthew 10:16). Earlier in the same verse he told them, "I am sending you out," while in Matthew 28:19, he said, "Go therefore." Christianity engages culture in order to make a difference in God's kingdom.

In ages past, Christians were on the forefront of science, the fine arts, philosophy, literature, and many other areas of cultural influence. By engaging culture, and teaching our children to do so, we can once again make a difference. That's why Sonlight Curriculum does not seek to teach children to entrench themselves in their own subculture or to unquestioningly embrace culture. Instead, we want to help you raise godly children who know how to engage culture intelligently, defending their faith "with gentleness and respect" ( 1 Peter 3:15).

Three of my favorite resources regarding Christianity and culture include Redeeming Pop Culture by T.M. Moore, All God's Children and Blue Suede Shoes by Kenneth Myers, and Culture Making by Andy Crouch.

What are you doing to help your children in relation to culture?

Holiness and a Culture of Theft